Get smart with your time -time management techniques to adopt

You will never be successful if you do not devote your best self to the report. That means adopting time management techniques and controlling that beast the email.

The rocks, pebbles and sand lesson on time management

He explained, “Rocks are the important things in your life — you must give them priority each day otherwise you can’t fit them in. Small pebbles — are the next important things. The sand (your emails, routine meetings, daily chores) — are the least important activities and should be made to fit around the more important tasks”.

“So why the coffee?” a student asked. “To remind you that you should always make time, every day, for a coffee with either a work colleague, a client or a friend,” the professor replied.

Have two, two-hour blocks of time every day to move a report forward

My father, changed his career in his thirties, moving from a clerk of the court to train as a lawyer. He had a full working day, four children under seven and a requirement to take seven exams together. Failing one exam meant a re-sit of all seven. As he only had the opportunity to study in the evenings and at weekends, my father had to follow a strict study timetable which he then introduced to me when I began to study for my university entrance exams. He took me aside and told me how he managed to study effectively.

He said the sweet spot for being productive was to work in a series of 1.5-hour / 2-hour blocks of time, free of interruption where you can concentrate on a key task, a Stephen Covey “Rock”, ensuring that you have a 10 to 20-minute break between these blocks of time.

I have applied this technique when writing my books, toolkits and articles, and when preparing presentations. I normally manage three blocks each day and have found it to be most beneficial.

Looking at the typical working day it would make sense to start the day off with two of these blocks; hence moving meetings to the afternoon.

If you have a report to research and write do not expect any major progress unless you achieve this benchmark every day.

Learning to say “No” to diversions and “Yes” to your report

Zoe Chance in her book, “Influence is your superpower – how to get what you want without compromising who you are”[i] has pointed out that far too often we have become a ‘people pleaser’ scared that “No” might offend.She recommends that for 24 hours you say “No” to everything. During this exercise you will find out that it does not bother people as much as you had thought and sometimes your involvement was not necessary in the first place. Frances Booth author of “Distraction trap: how to focus in a digital world”[ii] makes some very valid points.

“Learning when and how to say no is a way of valuing and managing our time.”

“When we say no to one thing, in effect we’re also saying yes to something else.”

Tips for saying ‘No’

Avoid an instant answer, listen carefully and ask questions. Are they trying to move a monkey on their back to your back? As Booth says, “Pausing before responding uses far less time than it takes to backtrack.”

Does it pass the “I would get started tomorrow if I had the chance test” If it does not it probably does not fit within the organisation’s critical success factors or your current “rocks” and it will not be more interesting in three or four weeks’ time.

Always know how many projects you currently have on and realise if you say “Yes” to a new project one or maybe two projects will need to be reassigned or abandoned.

Is the person asking you a ‘time waster’, one who does not respect others time, cancels meetings at a drop of a hat, is the kiss of death to a project?

Practise your “No” response:

“If I took that on I would have to abandon a couple of my projects to make room. I thus reluctantly decline.” 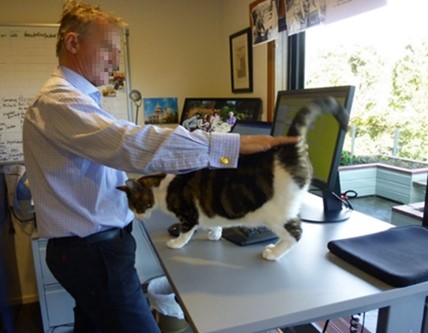 One common response I find when asking workshop attendees who have three screens, if they would go back to working with one or two screens is a resounding “Hell, No!”

In this picture you see that I have a stand—up desk with three screens. The middle one being my laptop. I would have four, except it would cut out my sea view.

If you have only one or two screens you are driving a model T Ford in the 21st century. Try three screens for a week you will never go back. Please note I am not suggesting that you use one for your emails. I have suggested in the third series that these are to be reviewed only two or three times a day starting at 10.30 am.

Research points out that stand-up desks will increase life expectancy and your productivity. Interestingly, from a reputable study, the findings were quite damming. They found if you sit for more than eight hours a day you have a:  91% increased risk of developing type 2 diabetes; 14% increased risk of heart disease; 15% increased risk of early death.

Interestingly, no amount of exercise in the early morning or after work can eradicate the damage caused by sitting for this length of time.

I now only use my chair for 40% of the time. Search the web for “Health benefits + standing desks” for more information.

Never move a meeting because you are busy

I learnt this lesson when I was a consultant in London. It had snowed and the four inches that settled on the road brought chaos, laughable to those in snow ravaged countries of Europe. We were to meet the client at their premises. The client cancelled as he was stuck at home.

The consulting partner said we can visit you at home. We spent the whole day getting there and back. On the trip back I asked the partner, “Why did we not move it to another day, it would have been more efficient.” He responded, “When you move a meeting, you have rolled that commitment into another day.” These words have resonated in my mind for the last 30 years.

Every time when it looks easier to move the meeting to another date the consulting partner’s advice comes back to me and I avoid the temptation to cancel the meeting. Every time, afterwards I reflect and thank that partner for the sound advice.

Why you should eat a frog every morning – see earlier article

[i] Zoe Chance, Influence is your superpower – how to get what you want without compromising who you are

[ii] Frances Booth, Distraction trap: how to focus in a digital world